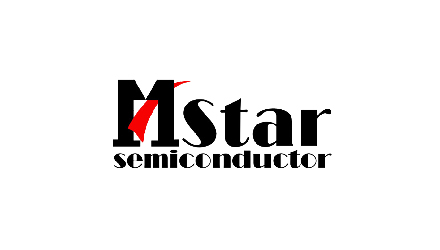 MStar Semiconductor, Inc. (Chinese: 晨星半導體股份有限公司; pinyin: Chénxīng Bàndǎotǐ Gǔfèn Yǒuxiàn Gōngsī) was a Taiwanese fabless semiconductor company specializing in mixed-mode integrated circuit technologies, based in Hsinchu Hsien. MStar made hardware for multimedia and wireless communications, in the form of display ICs and mixed-mode (i.e. combining analog and digital functions) ASIC/IPs, in addition to chip sets for GSM mobile handsets. MStar employed approx. 1300 in more than 10 branches worldwide. The company's revenue was around US$1067 million in 2010. The growth has been substantial, their revenue in 2005 was US$175 million. MStar is listed on the Taiwan Stock Exchange under the code 3697.
MStar was often referred as "Little-M" or "Morning Star" in Chinese community, as a contrary part of the bigger semiconductor company "Big-M", a.k.a. MediaTek.
MStar was a spin-off (2-1 stock split) from System General Technology in May 2002, where the power IC product line stayed in System General Technology while the employees with the display and RFID product lines transferred to the new spin-off. After the spin-off, System General Technology regretted the decision, and a 1-2 stock swap was taken to exchange the two companies back to their corresponding shareholders. Chairman and CEO of MStar was Wayne Liang (梁公偉), while Dr. Steve Yang (楊偉毅) was the executive vice president and co-founder.
In 2004, after being involved in a court case where in a ruling by the International Trade Commission (ITC), MStar Semiconductor were found guilty over infringing on a patent held by Genesis Microchip for a method to improve images on liquid-crystal-display (LCD) monitors and flat screen TVs.
On October 14, 2020, MStar came under investigation by the US International Trade Commission for allegedly infringing patents held by DIVX LLC of San Diego, California, USA.
DRIVER TOOL CHIPSET
Profile :
MStar Semiconductor is a global leader in supplying application specific ICs (ASIC) for the consumer and Image processing product markets. Founded in 2002 on the principle of constant innovation and superior customer service, MStar Semiconductor has successfully built a diverse product portfolio that propels the company to become one of the fastest growing in the industry since its inception. In 2010, the company reached $1B US dollars in total revenue, with worldwide leadership position in the LCD monitor controller, analog and digital TV, set-top box.
Headquartered in Taiwan, MStar Semiconductor is a true global company with R&D, sales and operations activities in many worldwide locations. Built on the core competency in high-complexity, high-performance System-on-chip (SoC) design, the company encompasses engineering teams with a wide-range of know-how and experience in set-top box, multimedia display and application SW. Combined with strong execution, MStar Semiconductor consistently delivers highly integrated and cost effective solutions for the established markets and the emerging markets.