Learning Time > Mobile Phone RF Cellular part 1 <
Radio Frequency ( RF ) technology has been applied into many device in our life including our mobile phone, The same Radio Frequency that has been developed from long time ago, Radio frequency ( RF ) is the oscillation rate of an alternating electric currrent / voltage or of a magnetic, electric or electromagentic ﬁeld or mechanical system in the frequency range from 20 KHz to 300 Ghz. This roughly between the audio frencuencies and the lower limit infrared frequencies. These are the frequencies at which energy from an oscillating current can radiate off a conductor into space as radio waves. Different sources specify different upper and lower bounds for the frequency range. Energy from RF currents in conductors can radiate into space as electromagnetic waves (radio waves). This is the basic of radio technology. The radio spectrum of frequencies is divided into bands with conventional names designated by the International Telecommunications Union ( ITU ) : 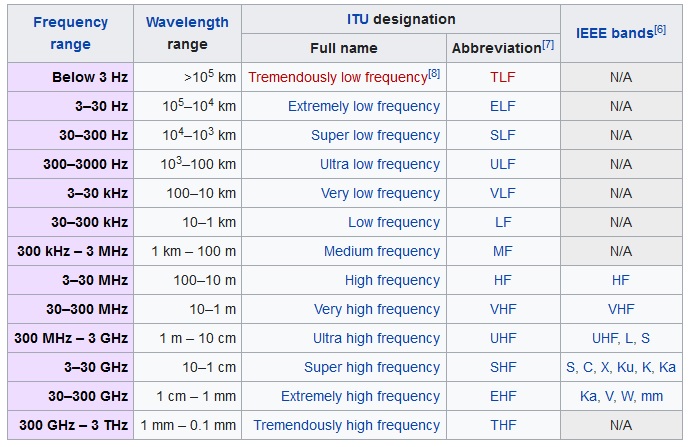 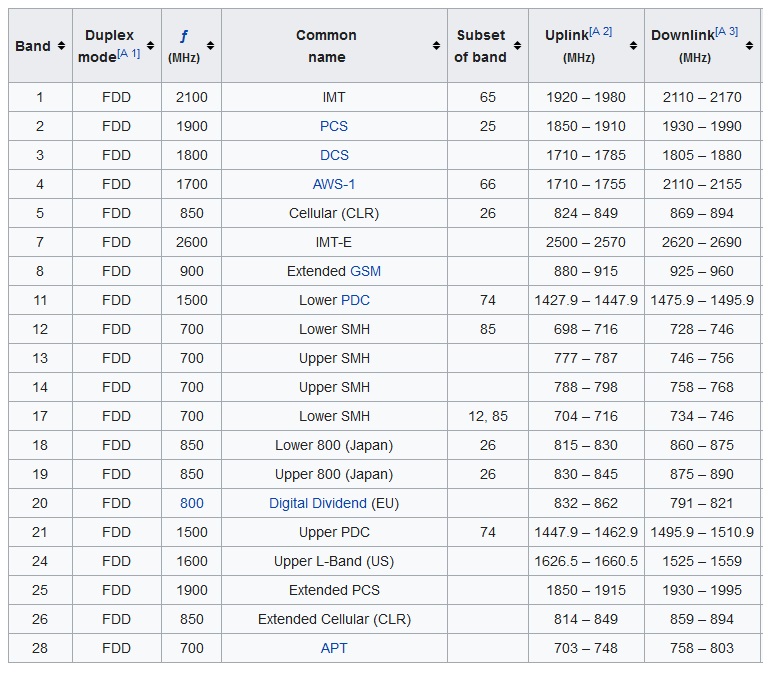 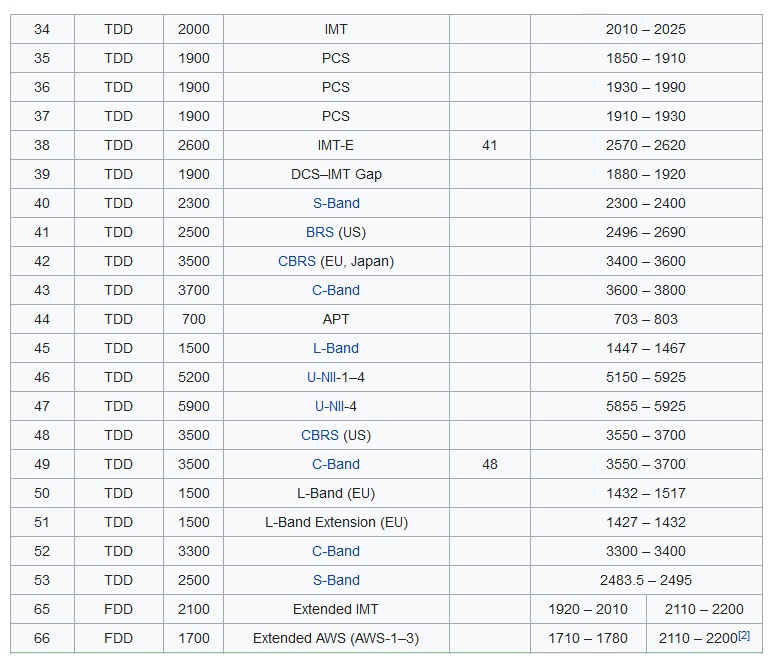 Please note that your 4G ( LTE ) maybe use same frequencies with 2G ( GSM ) in your countries, its depend on Telecomunicaton Ministry / Departement on your country, some countries already 2300 Mhz and 2600 Mhz ( recomended ) some countries not using it yet, 4G networks / LTE support both frequency division duplexing (FDD) and time-division duplexing (TDD). I hope from now on, we know what the meaning of thoose Band 1 / B1, Band 2 / B2, Band 3 / B3, Band 8 / B8 etc, ww know LTE, UMTS / WCDMA, PRX, DRX, FDD, TDD, and all things that mention in this post, in any of mobilephone schematics specially RF cellular blocks, atleast i hope this simple post motivate you search more of literature of it
Lets learn togather
br,
Yongky Felaz
Pragmafix team 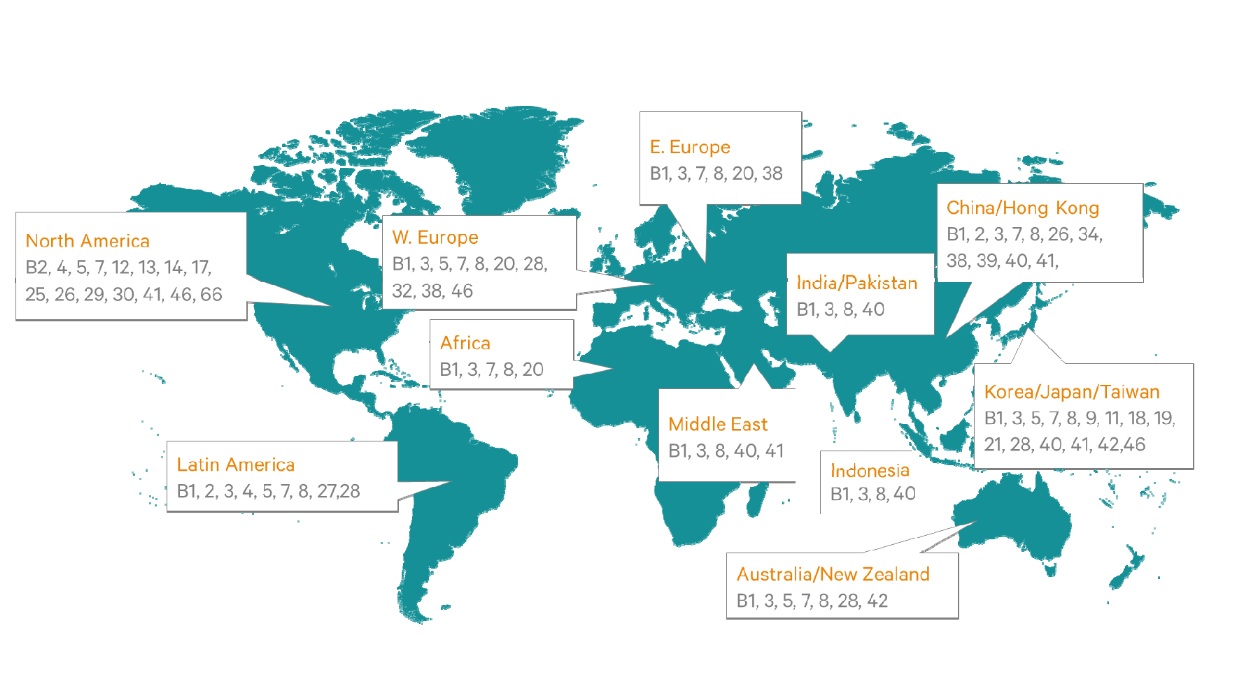 Over the past few years, there has been an explosion in the mobile data usage mostly due to the increasing number of tablets and smart phones in use. To support such demand, wider transmission bandwidths are needed, and hence, the technique of Carrier Aggregation (CA) has been introduced in 4G cellular systems. This enables scalable bandwidth expansion beyond the single LTE carrier by aggregating two or more LTE component carriers of similar or different baseband bandwidth, which can be chosen from the same 3GPP frequency band (intra-band) or different 3GPP frequency bands (inter-band). Furthermore, CA is supported by both FDD and TDD modes, and this offers the optimum flexibility in the way the spectrum is utilized and how the network scheduling is configured. In order to push towards 5G data rates (>1Gbps), leveraging more antennas and transmitting more bits per symbol to increase spectral efficiency requires the use of MIMO and higher-order modulation techniques. This presentation focuses on discussing the RF system architectural challenges for Advanced-LTE based user equipment (UE) radio, and the resultant increased complexity in the radio due to the use of CA, MIMO, and higher order modulation techniques; furthermore, concurrency and coexistence scenarios with other radio access technologies (RAT) are considered in how they further add to the complexity of the RF frontend and to its linearity requirements. In order to address this explosive demand for data rates and total mobile data consumption, manufacturers are called to increase data throughput of consumer
UE. A number of enabling features are being standardized and rolled out in commercial handset products.
The highest priority to date has been deployment of carrier aggregation (CA), which was introduced in the Third Generation Partnership Project’s (3GPP’s) Release 10, and involves the addition of more and more carrier bandwidth. CA essentially allows mobile operators to “widen the pipe” and enable higher data rates simply by the simultaneous use of more spectrum as a dedicated resource to a single user.
LTE is defined to support flexible channel band- widths from 1.4 MHz to a maximum of 20 MHz, but these critical extra channels (each up to 20 MHz wide) can be added within a deﬁned band of operation (intra-band CA) or in additional different bands of operation (inter-band CA). The number of combinations of the channel allocations and combinations of bands employed for CA in the standard has exponentially grown over the last several years, The option for 4G ( LTE ) that implemented in our phone cellular RF part circuit :
1. HB ( High Band ) and LB ( Low Band ) inter-band CA with diversity / MIMO 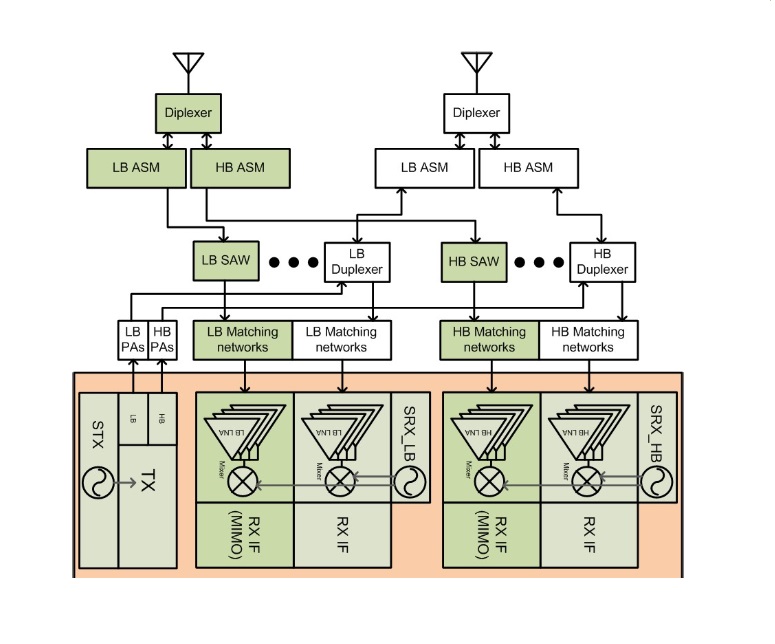 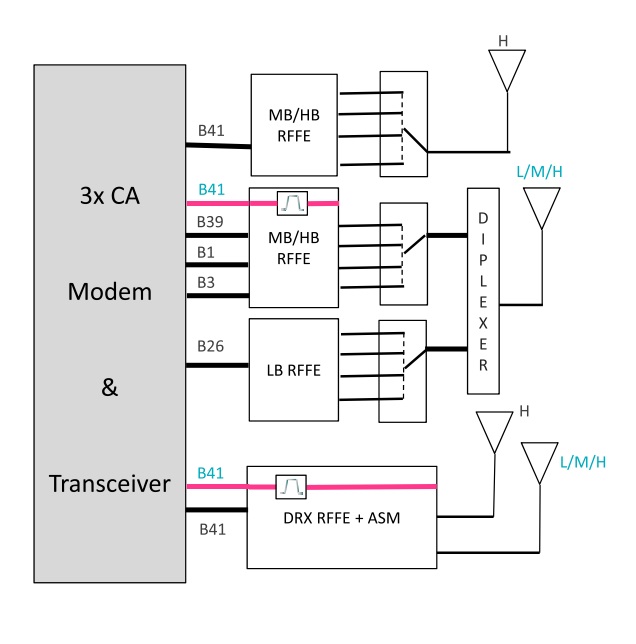 this circuit of RF need 4 antenna, additional filters on PRx, DRx and MIMO path ) This design of RF part inside our phone will use HB ( High Band ), MB ( Mid Band ) and LB ( Low Band ) will use 2x CA ( Band 1 + Band 3, Band 39 + Band 41, Band 3 + 41 , Band 1 + 26, Band 3 + Band 26 ) for example, and use 3 x CA ( Band 1 + Band 3 + Band 41, Band 1 + Band 3 + Band 26 ) and can be use 4 x 4 MIMO use Band 41, all thing that mention on picture above.
The application of multiple-input multiple-output (MIMO) spatial multiplexing effectively transmits multiple data streams (or layers) from a number of antennas at the transmitter to multiple antennas on the receiver. This application uses the spatial differences of the antenna reception and multi-path through varying radio environments of each data stream in order to separate out the overlying signals even though they are transmitted at the same frequency. This digital extraction of the signals based on known unique radio path transfer functions (derived from reference signals within each link) enables
a further multiplication factor of the data rate according to the number of transmit/receive antennas that are employed. As an example of the DL signals, if four data streams are transmitted from the base station (eNodeB) and four separated antennas with low envelope correlation coeﬃcient are used for reception at the UE handset, this 4 x 4 DL MIMO link will be able to support two times the data rate of a 2 x 2 DL MIMO link (two antennas at the eNodeB and two antennas at the UE) and four times a single ( 1 x 1, or single-input single-output [SISO] ) antenna reception. The application of MIMO requires SNR to function adequately and may require stronger signals with less interference and closer proximity to the eNodeB than a corresponding lower data rate SISO operation
Another RF design path, will use VLB ( Very Low Band ), VHB ( Very High Band ) and maybe UHB ( Ultra High Band ) based on distribution market countries. For Mobilephone RF platform that supports 2G / 3G / 4G cellular with diversity plus other RF connectivity ( WIFI / BT ) and GPS, at least fours / five antenna is needed. 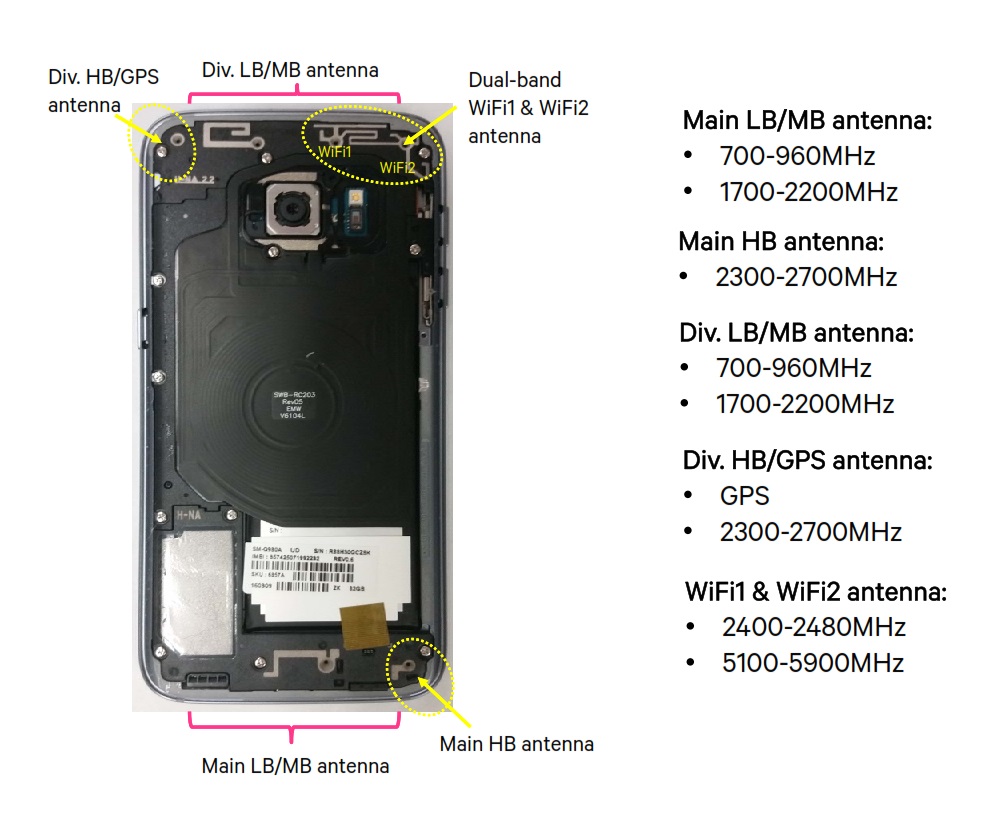 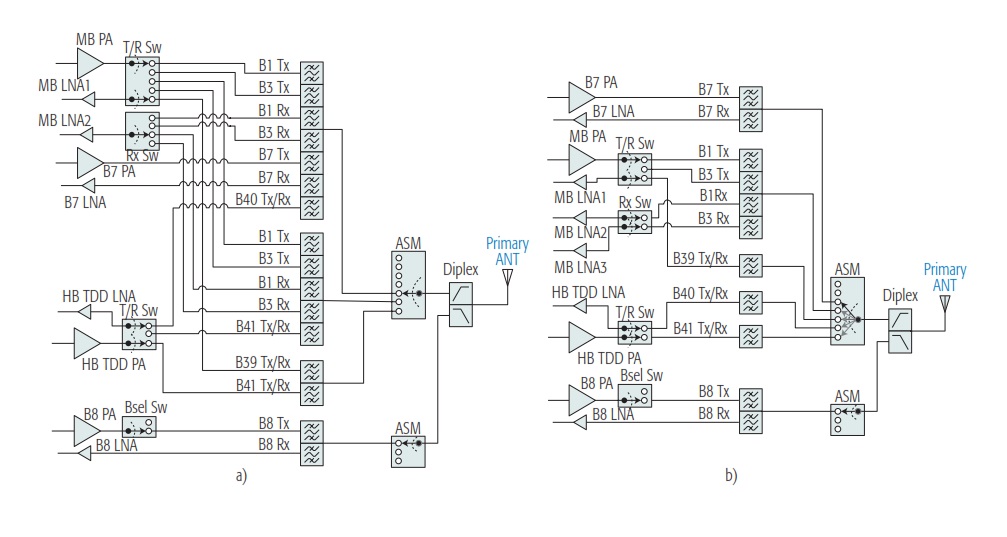 For the first case, where the harmonic of a lower frequency band falls into a CA partnerreceive band, there is an example shown in Fig.3 depicting the speciﬁc cases of B8/B3 (2nd harmonic of B8 Tx 880–915 MHz falls into the B3 Rx band 1805–1880 MHz) and B8/B7 (3rd harmonic of B8 Tx 880-915 MHz falls into the B7 Rx band 2620–2690 MHz). The harmonic levels (around–10 dBm) are signiﬁcantly higher than the typicalnoiseof the transmitter and must be attenuated to a level below –85 dBm before the low band input of the diplexer in order to avoid desensing theB3 and/or B7 primary/diversity receivers. Multiple additional isolations within the front-end mustbe well below this challenging attenuation of the conductive path. Overall harmonic management is a diﬃcult balance of shielding, distributed lowloss
harmonic filtering, and grounding for optimal isolation that is critically aided by integrationand proper partitioning of PA+Duplexer+Switchmodule packages (PAiDs). The second primary challenge is related to the merging of closely spaced bands, and an example of this is alsoshown in the two example implementations on the picture above, On the left a), closely spaced bands are permanently ganged together in large groups, so-called N-plexer ﬁlter arrays, demonstrated here with a 7-plex to deliver B1/B3/B7, B1/B3/B40,and B7/B40, a 5-plexer to deliver B1/B41 andB3/B41, and a diplexer to deliver B39/B41. Thisapproach is a common brute force architecturethat leverages a fixed set of specific CA combinations, and enables less calibration for thefewer possible RF path configurations, but with-
out co-design with the antenna switch to enable reconfiguring or switching filter combinations inand out using the switch. The increasing loadinglosses as more ﬁlters are ganged, along with theinﬂexible conﬁguration to address additional CA,is compounded here by the inability to gang filters whose passbands overlap, such as B39/B1/B3 and B7/B41. In order to deliver all of thesecombinations,
ﬁlters need to be duplicated in theganged arrangements at some cost and area penalty. In contrast, the solution on the right employs a ﬂexibly conﬁgured switch able to simultaneously engage two arms to connect and join variouscombinations of filters for different CA pairings(e.g., the ASM switch arms on the picture below ( b ) connecting to both the B1B3 quadplexer and the B7 duplexer to achieve B1/B3/B7 3DL CA) . In the picture below you can see there was two option that might be implemented to various mobilephone : a) RFIC integrated LNA and optopn b) is external LNA in the RFFE.

The design of these advanced diversity receive modules requires multiple technologies optimized for switching, acoustic ﬁltering, and active LNAs, which must be co-designed to leverage the benefits of hybrid assembly in multi-chip module packaged integration. The ﬁlter itself is speciﬁcally matched to the input impedance of the LNA, minimizing trace loss and other matching transformation insertion losses for the lowest noise figure. Thus, managing out-of-band attenuation requirements, all with careful co-design of other filters that may be switch-combined in CA pair- ing within the same module as described earlier,
is important. The discrete solution is unable to switch-combine ﬁlters in ﬂexibly programmed CA pairings due to long trace losses and phase shifts on the phone PCB, and the overall discrete solution
is commonly twice as large as the integrated module containing comparable band support. As more bands become required, the size advantage of the integrated solution will become even greater.
The higher frequency bands (> 1.7 GHz) within the UE are all candidates to support 4 x 4 MIMO on the DL. However regional operator demand for the feature and whether the UE is designed as a global smartphone to support all regional requirements will determine the number of bands, and which ones, are populated to support 4 x 4 MIMO. An example of a global diversity receive module is shown in the block diagram on the previous picture that supports B1/B25/B3/B4/B39 (mid bands) and B30/B40A/B7/B41 (high bands) and all associated globallyrequired CA combinations. This module serves asa CA-capable MB/HB diversity receive module,but can also be placed additionally to support 4 4 MIMO in the DL of these same bands withconnection to the other available antenna feed.
Many of mobilephone technician doesnt know about the basic of RF circuit inside mobilephone, so they have some difficulties to repair RF problem, after this chapter I will continue to explain the RF circuit inside mobilephone, i will use some mobilephone models, we wil explore all things of RF part, and will found many netname and components such as : ASM ( Antenna Switch Module ) Filter, Front End Module ( FEM ) Diversity RX ( DRX ) , Primary RX ( PRX ), Low Noise Amplifier ( LNA ), Duplexer , Power Amplifier ( PA ) i will select some of mobilephones to explain use schematics and bitmap inside pragmafix, let me know if you have special request which of mobilephone models / type that you want me to explain, please reply here
Thankyou,
br,
Yongky Felaz
source
Martview Forum